Find out more about becoming a volunteer. 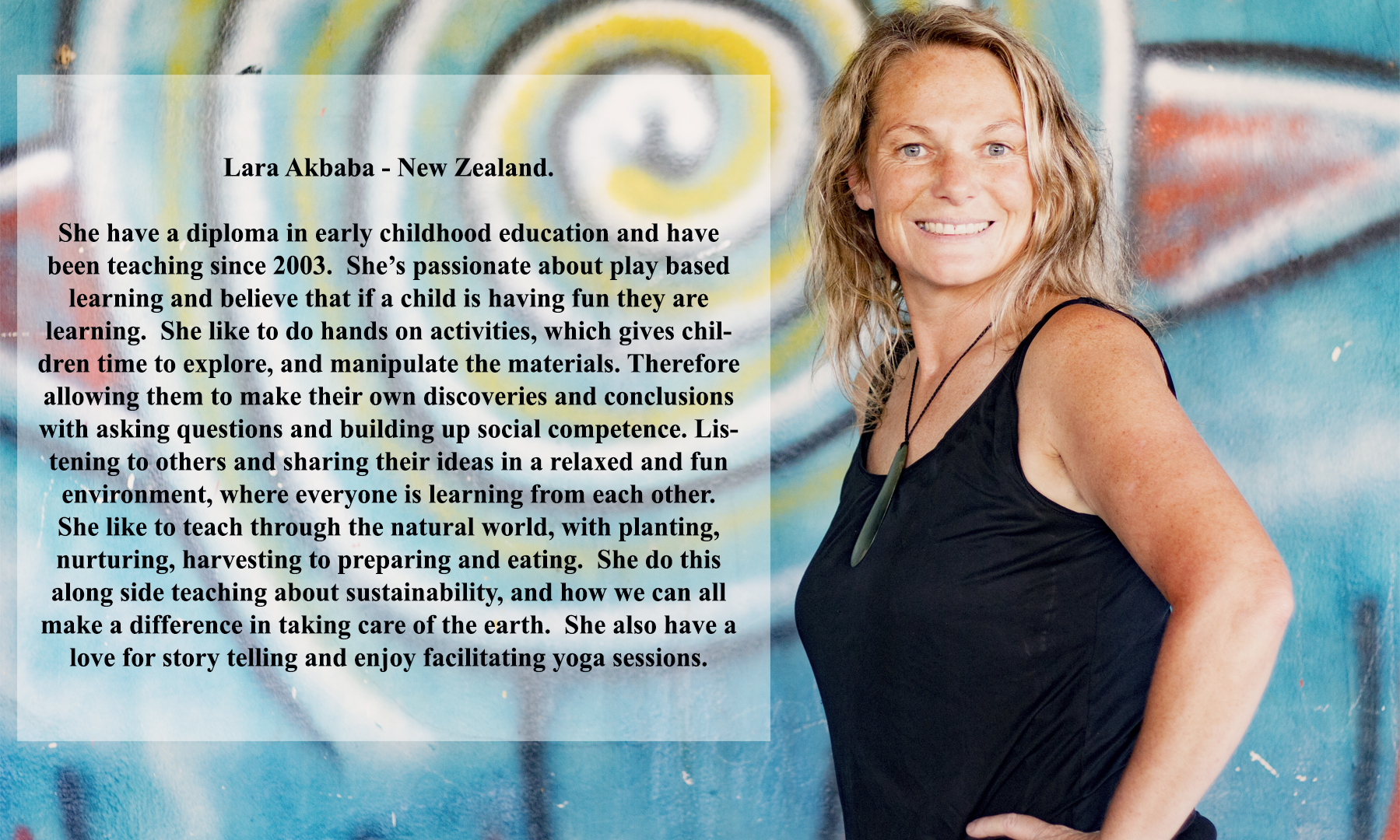 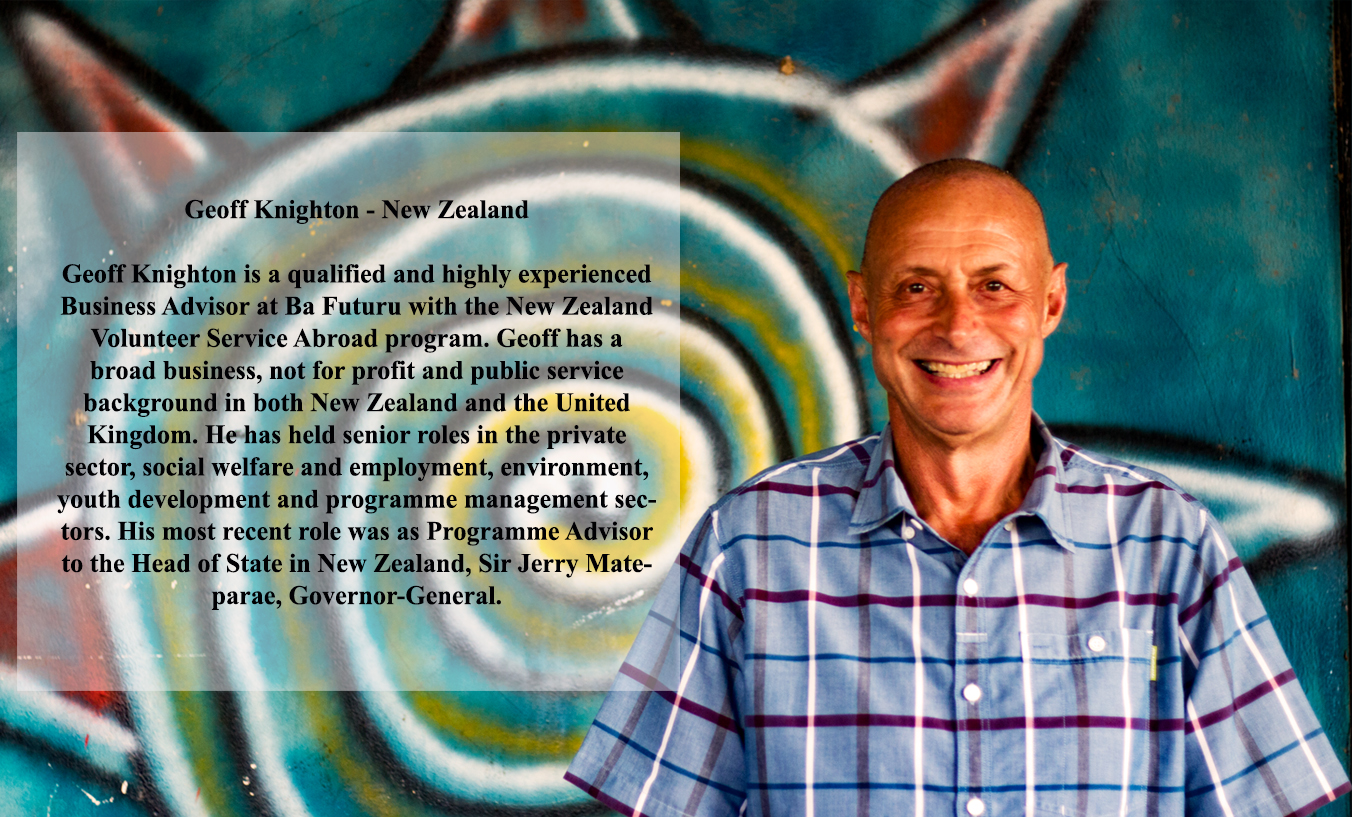 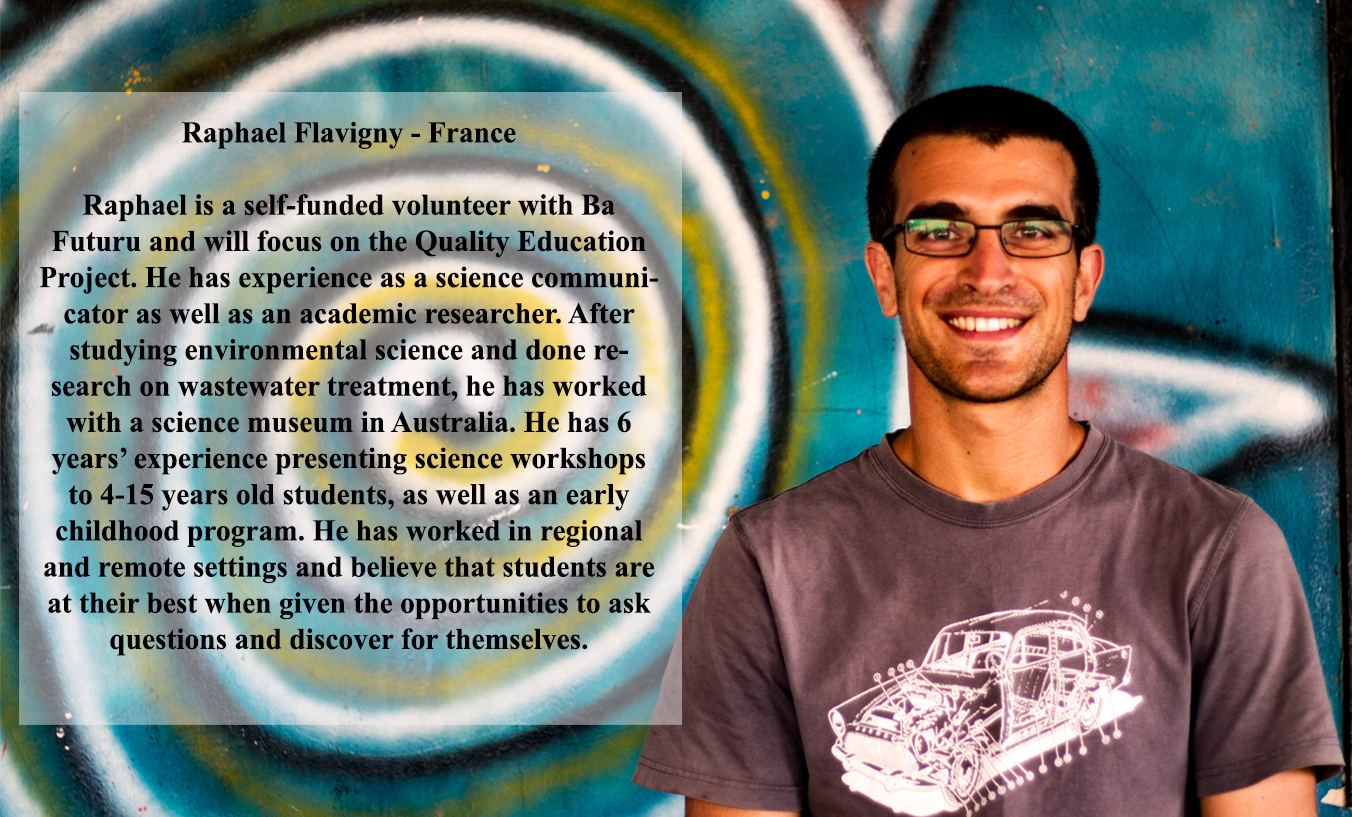 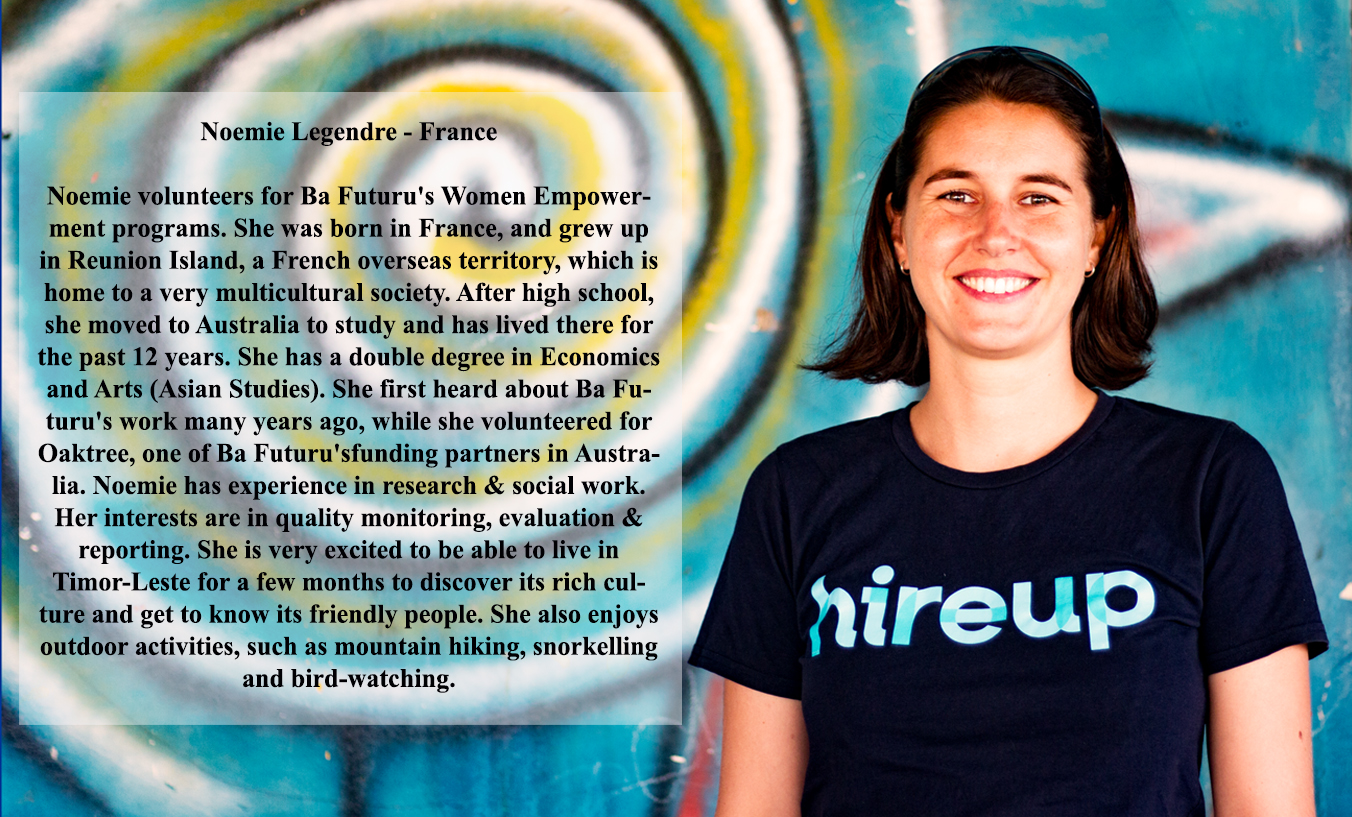 Laura Ogden – AVID, Australian
Laura was an Australian volunteer who worked with Ba Futuru for three years helping to grow the organization on various levels. She supported organizational development, child protection protects and spearheaded the High School Transformation Project. Before coming to Timor-Leste, Laura lived in Melbourne, where she worked as a project coordinator of local government public art programs, and studied Cross Disciplinary Art & Design. Previously, she has lived in Sydney and Mexico City where she studied Sociology and Spanish & Latin American Studies.

Stephanie Harris
Stephanie is a VSA volunteer from New Zealand who volunteered with Ba Futuru for 10 months during 2014 while in undergraduate school. Stephanie has a background in youth work and supported Ba Futuru’s Afterschool Program and High School Transformation Project.

Katie Dobosz- American
Katie Dobosz volunteered with Ba Futuru in Timor-Leste as part of the NYU Applied Workshop in Peacebuilding. Today Katie continues to support Ba Futuru from the United States with fundraising.

Lucinda Kaval – Australian
Lucinda was Ba Futuru’s second AYAD volunteer, who later become a VIDA and then a consultant with Ba Futuru. She worked predominately with Ba Futuru’s management team, who benefited enormously from her ability to support them in performing organizational development, while also engaging them in their own professional development. Luncina also supported Ba Futuru child protection projects and helped to build protection systems.

Emma Dawson – Australian
Emma was particularly interested in using theatre as a peace-building tool in post-conflict communities. Emma has played a key role in setting up, developing and coordinating Ba Futuru’s theatre program, which explores peace and development through theatre performances in rural areas. She also facilitated theatre classes and other activities for at-risk youth. Emma has a Bachelor of Communication and a Masters of Peace and Conflict Studies. Originally a volunteer with the Australian Youth Ambassador for Development (AYAD) program, and later worked as an international consultant for Ba Futuru.

Paula Clothier – Australian
Paula Clothier had a Masters degree in Development Practice from the University of Queensland, Australia where she focused on the social aspects of international community development including gender planning, social impact analysis, human rights education, and program evaluation. Many of Paula’s academic research projects centred on the Timorese context, exploring issues such as the prevalence of gender-based violence, access to justice through legal pluralism and post-conflict trauma recovery. Paula returned to Ba Futuru to take up a position as International Program Coordinator on the Empowering Women and Establishing Grassroots Protection Networks Project, an initiative in 2011. In November of 2012 Paula was hit by a motor bike and died while in Timor-Leste. Ba Futuru will always appreciate the contribution that Paula made to the lives of women and children in Timor-Leste.

Julia Scharinger – Austrian
Julia Scharinger volunteered for six months during 2011 to do a Theatre of the Oppressed-project with students from Ba Futuru’s Peace Centre. She returned in 2012 and was employed as the Early Childhood Education Specialist. Julia is an experienced early childhood educator, and has worked with children and youth in a variety of countries and settings. She also has a Master’s degree in Political Science from the University of Vienna, Austria, focusing on peace building, domestic violence and using the arts to promote human rights. She is currently completing a Masters of Development Studies. Julia is also the Vice-President for the Theatre of the Oppressed – Vienna (TdU-Wien).

Lindsey Greising – American
Lindsey arrived in 2008 as a volunteer for Ba Futuru and stayed for nine months. First stationed in Baucau, she was involved in capacity building staff on conducting human rights trainings, and doing organizational management. She then moved to the Dili office to manage Ba Futuru’s reintegration program for internally displaced people, and assisted in grant writing, editing annual and donor reports, and overall capacity building for staff. After law school Lindsey returned to Ba Futuru to spearhead our Empowering Women and Establishing Grassroots Protection Networks Project, she is now working elsewhere but continues to support Ba Futuru as an advisor.

Jennifer Buss – Australian
Jen was an Australian Youth Ambassador Volunteer (AYAD) assisting Ba Futuru with project development and management. She was an advisor to the High Schools Transformation Project. Jen has a Bachelor of Economics and a Bachelor of Arts, majoring in Geography and International Relations. Prior to coming to Timor-Leste, Jen had been working in land and indigenous policy in the Queensland Government.

Jemma Williams – Australia
Jemma assisted Ba Futuru with communications and documentation. Jemma specialised in international development and has an Honours degree in International Studies from the University of New South Wales. She has travelled extensively and published a number of articles focussing on social justice and the environment.

Makoto Abe – JICA, Japanese
Makoto has a Masters Degree from Sophia University, Japan, where he focused on democratization, election management and institutionalization. He also worked as an intern at a peace-building NGO in Japan and as a volunteer at a community development NGO in Kenya. He worked with Ba Futuru as a Project Development Officer from 2011 to 2013 through the JICA program.

Hiromi Akutsu – JICA, Japanese
Hiromi has a bachelor degree in International Relations from Obirin University, Japan. During college, Hiromi participated in many cheer dance competitions and won dozens of prizes in Japan as well as the United States. After graduation, she worked as a dance instructor. At Ba Futuru she taught drama, dance and children’s activities at Ba Futuru’s Peace Center.

Saki Yakabe – Japanese
Saki has a bachelor degree in photography from Osaka University of Arts. After graduation, she worked as bridal photographer. She also worked at Contemporary Art Museum Kumamoto in Japan as an assistant curator, where she helped organize exhibitions as well as art and photography education. At Ba Futuru she taught photography, art and media at Ba Futuru’s Peace Center.